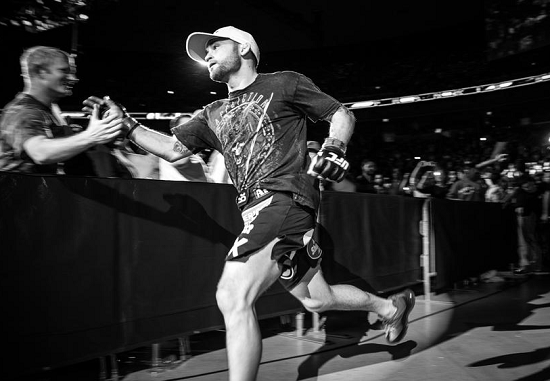 Last night in the main event of UFC Fight Night 57, Frankie Edgar scored a late 5th round submission win over Cub Swanson, earning himself a Performance of the Night bonus in the process.

As always, the Twitter-verse erupted with reactions from fighters, fans, and celebrities. Below is a compilation of the best reactions.

Cub Swanson out to "Jungle" by Jamie N Commons and X Ambassadors. Frankie Edgar to "Kick in the Door" by Notorious BIG #UFCAustin #UFC

Going with @FrankieEdgar for the win tonight!! But don't put anything past Cub, with his knockout power anything can happen! #UFCFightNight

Man this is gonna be nuts!! Who's every1 pickn? @FrankieEdgar @CubSwanson @ufc Curious if Frankie can keep Cub from gettin crazy!

Pumped for this fight!!!! And you can't get better seats unless I'm the one fighting. http://t.co/RL0bboy5yT

Great start to this fight. Cub landed some big shots, but Frankie countering with a nice throw at the end #UFCAustin #UFC

I never agree with the punch stats #UFCAustin

Rd 1 Edgar but Cub is throwing some heat behind his punches. Frankie doing what he does. #UFCAustin

As I said Edgar putting it on Swanson

Frankie is a lot faster than Cub thought. Edgar with dominate rd 2. 2-0 going into 3rd #UFCAustin

Either of these fighters would dominate Conor

Frankie is fighting possessed. Man on a mission! Dominate rd 3 and he is looking for the finish. Cub needs a finish to win now. #UFCAustin

Edgar doesn't rest. When he's on top, he is constantly threatening with a pass or punches. #Learning #UFCAustin

Frankie picked up right where he left off in previous fight. Dominant takedowns, punishing ground work. Cub needs a rally.

Frankie is putting a ground and pound clinic on Cub. He will not be denied! Rd 4 easy. Cub will go for broke in 5th. #UFCAustin

@FrankieEdgar you are a treat to watch sir

Cubs leading with power uppercuts n right hands without setting them up. Franky makes him pay every-time with a takedown or counter right.

@FrankieEdgar is a legend, HOF.

Hell yeah!!!! You the man @FrankieEdgar wouldn't be a FE fight without a Lil nose bleed east coast stand up bump that B.I.G @ufc #UFCAustin

Congrats to @FrankieEdgar! @CubSwanson you are still a beast! Keep your head up! Respect for both guys! #UFCAustin #UFCFightNightAustin @ufc

Gotta love @FrankieEdgar ! U the man!

That was an incredible example of urgency by @FrankieEdgar. Wanted a finish & got one. Inspiring! @ufc

Frankie can be a champ at any weight class. His Heart alone would carry him to the top

Frankie pulls off latest finish in UFC history & the "Answer" to the McGregor hype train. Littlest engine that could, be champ. #UFCAustin