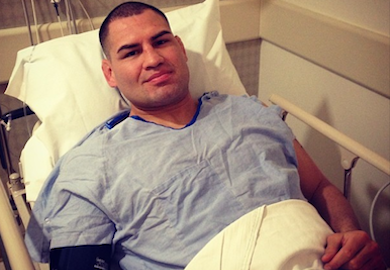 UFC Heavyweight champion, Cain Velasquez, has gone under the knife for a torn labrum.

Initially it was thought that the UFC’s personal ‘Brown Pride’ representative would not need surgery, but Cain and his medical team decided that the medical procedure was the right course of action.

The champ is no stranger to surgery and the associated rehab. Following his UFC 121 bout with Brock Lesnar, Velasquez underwent surgery for a torn rotator cuff.

For now though, Velasquez is happy to confirm the surgery went as planned.

My shoulder surgery yesterday went well. Can't wait to be back at it! http://t.co/sugfDxh4aB