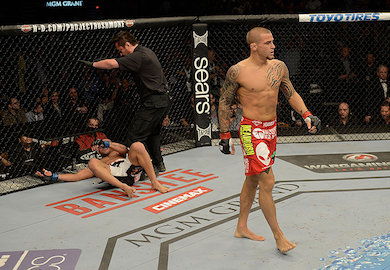 This Saturday fans got to see a great night of fights with UFC 168. In kicking off the main card on PPV Dustin Poirier knocked out Diego Brandao in the first round.

For those that didn’t watch the weigh ins Brandao weighed in 8 pounds over the featherweight limit of 145 pounds. After the weigh ins were over Brandao continued to cut weight but could only reach 151.5.

During the staredown between Poirier and Brandao, Poirier pointed and Brandao and began yelling at him. We didn’t know what was said in the heated exchange but later it was confirmed that Poirier had yelled:

Poirier has since said his outburst of anger did not stem from Brandao not making weight but rather from an outburst from Brandao backstage earlier.

Poirier talked about the incident after his fight, saying:

“I was so mad because before we walked on stage at weigh-ins, he told me he was going to stab me in the neck actually. They had to separate us. The guy’s nuts, man. That’s why I was so upset.”

“We were in line, waiting to walk out for weigh-ins, He comes to me, and he says, ‘You stare at me like this again, and I cut your neck. Then what are you going to do?’

“I wasn’t mad about him missing weight. That sucks. But him stabbing me in the neck? That’s not cool.”