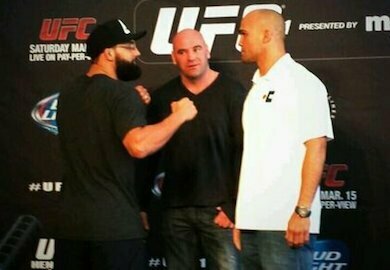 At today’s UFC 171 pre-fight media event, main card fighter’s squared off for the camera’s in anticipation of Saturday’s pay-per-view event in Dallas.

In the main event, Robbie Lawler and Johny Hendricks (pictured above) square off for the UFC’s welterweight title, and Carlos Condit vs. Tyrone Woodley (below) is set to co-feature the event.