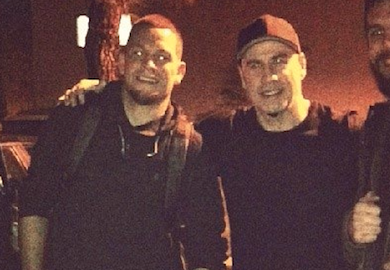 Hey look guys it’s actor John Travolta hanging out with his pal, Neve Draw, or as the rest of us know him, Nate Diaz. Yes, fresh off of his catastrophic name blunder at the Academy Awards, where he introduced singer Idina Menzel as Adele Dazeem, it appears that Travolta is kicking it with the younger of the two Stockton bros.

Travolta’s name has been everywhere since his awards show blunder Sunday night. There’s even name generators out there now that will “Travoltify” your name.

So what is Nate Diaz doing with the Hollywood actor? Apparently they ran into him after a workout and decided to snap a picture. Whatever the reason, is it safe to say that this is the most random picture of the day, week, month, even year? I don’t know, the internet is a crazy place, so I’m sure there’s plenty of awkward photos like this waiting to be unearthed. But right now we have this one, so let’s enjoy it.

The “Pulp Fiction” actor doesn’t look phased from all the backlash, and has yet to put out a statement regarding it. Who cares. Maybe he should get his pal Nate to write up a statement for him, that would be entertaining. You know, when he’s not to busy asking to be released by the UFC and stuff. Or maybe Travolta could manage all of Diaz’s speaking affairs and just accidentally insult people by saying their names wrong, instead of purposely insulting them with curse words and middle fingers. Am I the only one that wants this to bloom into a real friendship?

By: Ryan C. Miller or as Mr. Travolta would say Rhys Coof