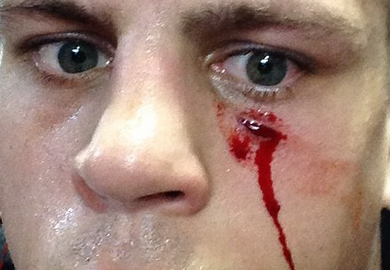 Several weeks ago, Joe Lauzon and Michael Chiesa squared off in the Octagon in an epic bout that was cut short by a doctor stoppage after Lauzon opened a very deep cut on Chiesa’s eyebrow.

Chiesa demanded a rematch, saying that he was never in danger, and that Lauzon in fact had gassed himself out.

Yesterday, Lauzon took to Twitter to reveal that he suffered a nasty cut to his cheek just 6 weeks before the Chiesa fight.

I didn’t want to post this before my last fight, but this happened about 6 weeks out. #DamnElbows