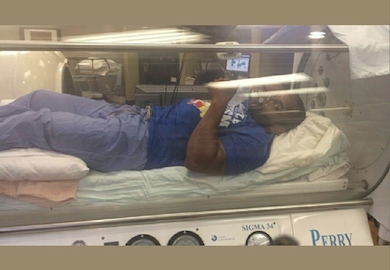 He doesn’t really tell us why, but UFC 173 fighter Daniel Cormier is using a hyperbaric chamber near his home in San Jose.

Hyperbaric chambers are used to treat a long list of ailments, including sports injuries.

The caption reads, “Spent some time yesterday at bay area hyperbarics. What a process this is, I was afraid of the chamber a little but once in it was fine. And man I feel so much better. Sometime u have to change and challenge ur thinking. I’m glad I did. They do a great job! I’m gonna be ready. DC”