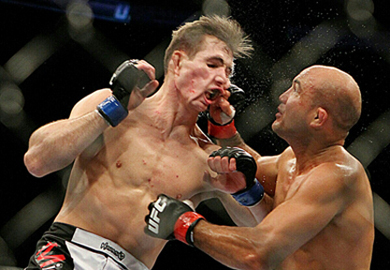 Last night in front of a sold out KeyArena in Seattle, BJ Penn returned to action against the talented Rory MacDonald.

It didn’t go our way.

As the BJPENN.COM director I always do a post-fight thought. After UFC 94 I told the Penn Nation to hold their heads high. After the first Edgar loss I promised everyone the champ would be back. I have always been able to find words of inspiration in times of defeat but last night those words never came.

Today, now that I have safely made it to my home and had almost a full 24-hours to settle into the idea that my boss and friend, BJ Penn, just lost again, I still don’t have much to say.

I just don’t like the idea of doing it again, I don’t think I can repeat the past stories, because I am still sad, I’m sad for BJ.

At the end of the day, I am more than a friend and employee, when it really comes down to it I am a fan of BJ Penn. That’s the reason why I took this position in the first place. It’s because of my own status as a fan that I feel what all his most loyal supporters feel. It’s depressing, disappointing and sad.

But I don’t really consider my feelings at the moment; my feelings are not important. I was with BJ in the lead up to the fight. He was a happy, confident and rejuvenated fighter who truly believed it was his turn to make a lasting impression on the big stage.

BJ listened to his critics, changed his training, and came in healthy and ready to return to his old ways. He truly believed that it was time and he was ready.

It just didn’t happen that way.

One can only imagine what BJ truly feels when the lights shut off and it’s only his thoughts he is left with. Hopefully he realizes that all his fans still support and still love him, not only for his success in sports, but also for his heart and determination in defeat.

When I walked into my house, looked at my phone and checked my email the photograph included with this little write-up inspired me to write it out.

The picture alone tells the story of the man.

As a larger Rory MacDonald towers over BJ, BJ still finds the heart to land this crushing right hand. And even though the negatives far outweigh the positives last night, remember this picture, remember the man as he is. He never gave up, he never quit, and even though he did lose all three-rounds last night, he didn’t go out without a fight.

What else could we ask of him?

Now for those concerned, BJ is OK. He did skip the post-fight press conference last night, but outside of a few stitches he was back at his home watching TV and reflecting on the fight with his closest friends and family.

I’m sure he will address you guys soon on his own, but for now that is all I have.

Props to Tracy Lee for the amazing photograph!