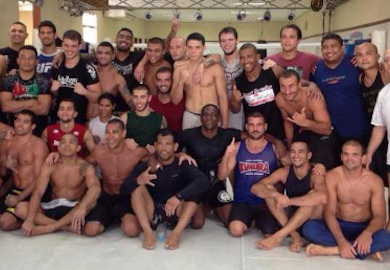 Under the tutelage of head coach, Andre Pederneiras, former two-division UFC champion, BJ Penn, has officially left the comforts of home in Hilo, Hawaii, to train with his team in Brazil.

Seen in the photo, BJ Penn is helping prepare Jose Aldo and Renan Barao for their upcoming title fights at UFC 169.

Penn is also awaiting his return to action in a third tilt against Frankie Edgar later this year.

Think the change of atmosphere will prove fruitful for BJ?