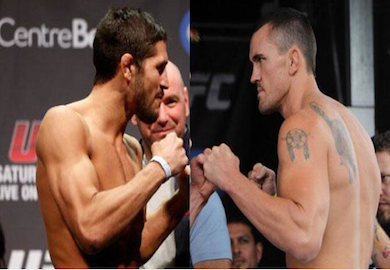 Two international UFC favorites have been called upon to coach the new international season of The Ultimate Fighter: Canada vs. Australia as Patrick Cote (20-8) and Kyle Noke (20-6-1) square off, first as coaches, then as opponents in the Octagon.

Both fighters have once appeared on the UFC’s reality show, Cote in TUF: The Comeback and Noke during TUF: Team Liddell vs. Team Ortiz. Neither man was able to win the show’s contest.

As for their coaching jobs, the two welterweights will be training fellow 170-pounders.

For Cote, he went undefeated after being released from the UFC during his last stint with the promotion. During his current ride under Zuffa management, Cote has gone 2-1 losing only to Cung Le at UFC 148 then grabbing a win over Alessio Sakara by way of disqualification, and most recently edging out Bobby Voelker in his native Canada at UFC 158 in Cote’s welterweight debut.

Noke is hot off his welterweight return as he dispatched Charlie Brenneman at UFC 152 in just 45-seconds of round 1. He holds a 4-2 record in the UFC and has finished every single one of his wins.

Tryouts for TUF Nations: Canada vs. Australia will take place in September in both Sydney, Australia and Toronto, Ontario, Canada. Registration forms are available on July 1st at UFC.com/TUFNations. The preceding link does not have a corresponding page but will seemingly be updated on the July 1st registration date.

The Ultimate Fighter Nations is expected to debut in early 2014. It will air in Canada on Rogers Sportsnet and TVA Sports and on FX Networks in Australia. A complete broadcast schedule will be announced by the UFC at a later date.