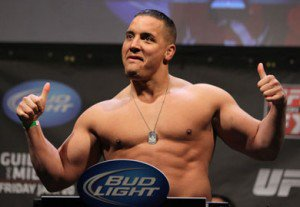 UFC officials have put together a fan friendly heavyweight matchup between Pat Barry and Soa Palelei.

The two heavyweights will fight later this year on Dec. 7 in the UFC’s return trip to Australia.

UFC Fight Night 33 will take place at the Brisbane Entertainment Centre in Queensland, Australia. The live event is expected to air on Fox Sports 1, though broadcast plans have yet to be officially announced. While the event officially goes down on Dec. 7, due to the time difference the American audience will actually catch this fight live on Saturday, Dec. 6.

Pat “HD” Barry hasn’t seen action since a June defeat to Shawn Jordan. The fan favorite heavyweight and popular video blogger will look to get back on the winning side of things and notch his first victory since fighting Shane del Rosario back in December of 2012.

For Palelei, he gets the chance to fight in front of his own countrymen in this new booking. The large Australian returned to the UFC recently against the undefeated and highly touted Nikita Krylov and beat him in the third via TKO. The bout garnered a lot of criticism from UFC president Dana White for being a lackluster, sloppy fight but to his credit, Soa suffered a rib break early in the bout and fought on to finish his man before the final bell.