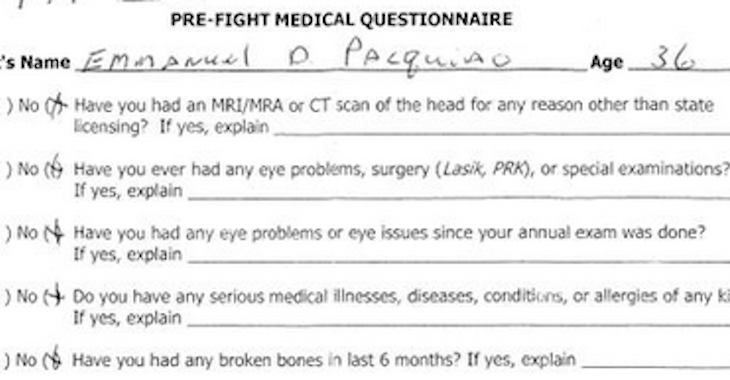 What good is the fight of the century without a little bit of drama?

It seems as if Manny Pacquiao and the Nevada State Athletic Commission are playing a little game of “He Said/She Said”. After the bout concluded, “Pac-Man” told the media that he was suffering from a nagging shoulder injury. He says he disclosed the injury to the NSAC and they denied his treatments that were cleared by the United States Anti-Doping Agency.

However, the “Pac-Man’s” submitted paperwork does not mention a shoulder injury anywhere. In a recent document leaked by Kevin Iole on Twitter, it is disclosed what medications Pacquiao was taking but nowhere does it say anything about a shoulder injury.

In an interview with the New York Times, Pacquiao’s personal advisor Michael Koncz admitted that the form was filled out incorrectly because of him. Koncz stated, “Number one, Manny didn’t check the box,” Koncz said. “I checked it. It was just an inadvertent mistake. If I was trying to hide anything, would I have listed all the medications on the sheet that he intended to use? We weren’t trying to hide anything.”

Regardless, Pacquiao will be getting surgery on his shoulder in the near future and may be eyeing a rematch with Floyd Mayweather somewhere down the line.