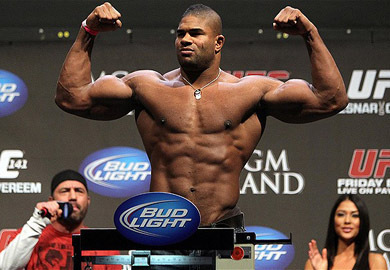 “If I waited for Cain vs. JDS, it would probably be next summer already. It’s been a year since I fought, so you’ve got to consider ring rust. You need to have the experience to use fighting as much as possible. Being out for 18 months would not have been positive. I want dos Santos to win so I can beat him, but I think Cain is going to take care of him for me, unfortunately. Junior is going to get taken down. He’s going to get ground-and-pounded. (Junior’s) been doing the zig-zag. He wants to fight me then he doesn’t, so then he fights Cain. I think he’s going to have his hands full with Cain. He’s going to lose.”