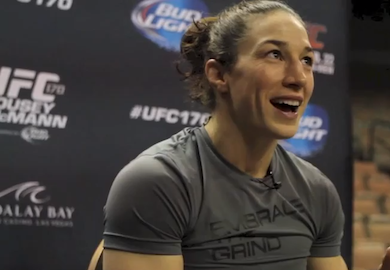 “Carano and Holm, predominantly have stand up backgrounds. You’re in a cage, she’s going to get your hands on you, and I just don’t think that they have the takedown and throw defense they would need to stop her from going to the ground.”

“When it goes to the ground, their strongest areas are gone. They would be put in dominant positions where she is far better than them.”

“That would leave Cyborg, but I truly believe Cyborg cannot make that weight. I don’t think it’s going to happen. I don’t think she can do it, but if by some miracle, some way, she did, she’d be too sucked out. She can’t recover and be able to do it.”

In a recent interview with FOX Sports, Sara McMann discussed the current state of the UFC’s female division.

McMann fought and lost to Ronda Rousey in February, and she fights this weekend on FOX Sports 2.