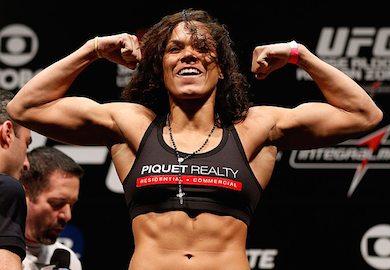 “I want to show in this fight that I’m ready for Ronda and for the title. This is the fight that I needed to prove I’m ready to fight for the UFC title… She will keep it standing, and that’s what I want, but as soon as she feels my hands, she will try to take me down or get me close to the fence. And I’m ready for this,” Nunes said. “I know she’s going to try this. I know she won’t try to trade punches with me because my striking is on a whole other level.”

In a recent interview with MMAFighting.com, Amanda Nunes (pictured) issued a harsh warning to her upcoming opponent, Cat Zingano.

Can she do it?

We’ll find out at UFC 178 this September.