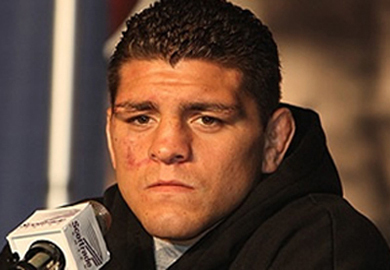 Yes you read correctly, Nick Diaz has missed yet another media obligation in advance of his UFC 158 welterweight title fight against champion Georges St. Pierre.

Diaz was supposed to participate in todays UFC 158 open media workouts, however, to the surprise of fans, media and UFC president Dana White, the Stockton slugger was nowhere to be found.

This isn’t the first time that Nick has failed to show up for media obligations, if you remember, Diaz was pulled from his first title shot opposite GSP for missing a pair of pre-fight press conferences for the UFC 137 event.

The open media workouts are used as an opportunity for fighters to reveal anything they’ve been working on in training, perhaps give a glimpse of their conditioning and of course, do some pre-fight media scrums with the press.

Ariel Helwani of mmafighting.com was the first to notice the absence of Diaz:

@arielhelwani – Diaz was supposed to be here 45 mins ago. They are looking to track him down. Still no sign of him at the workouts.

Ariel Helwani reached out to Diaz’s manager and trainer Cesar Gracie for an explanation:

@arielhelwani – @cesargraciebjj just told me Nick is not coming to the workouts. “7 hour plane ride while cutting weight is tough. Decided to rest up.”

According to Gracie, UFC President Dana White had given Nick permission to skip the workout:

@arielhelwani – @cesargraciebjj tells me now: “Dana previously OK’ed Nick not being at the workout.”

Here’s where things get weird… White was a guest on the Jim Rome show today and he seemed rather shocked that Diaz didn’t show up for the open workouts. Here is what Dana had to say:

“I literally just found out Nick Diaz did not show up for the open workouts today in Montreal….Let me tell you what, there is no shtick with this kid, I mean it’s – he’s just a different animal man, he’s absolutely hard to deal with.”

The fired up UFC President also discussed what could happen if Diaz fails to show up to tomorrow’s UFC 158 pre-fight press conference:

So what happens if Diaz does go on to win the title this Saturday night in Montreal you ask? Would he continue to get away with no-showing his media obligations? UFC President Dana White says no chance:

What are your thoughts? Let’s hear it Penn Nation!