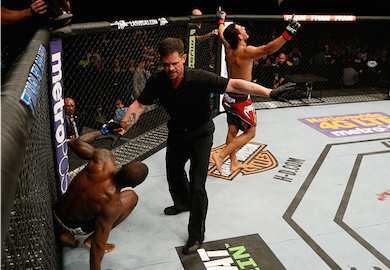 Note to fighters: when the fight is over it’s best just to go back to your corner and

A. Celebrate
B. Pretend like you won a decision (who knows, you might actually win)
C. Put your hands on your hips and shake your head in disappointment.

So which one did former UFC lightweight Jason High do in his last bout against Rafael Dos Anjos? Well High decided to go for the ultra rare ‘push the referee because you are mad’ option. High was upset because during the rampage of punches dealt to him by Anjos that ended the fight, some of them seemed to be to the back of the head. For that High was cut from the UFC. On Wednesday the New Mexico Athletic Commission met and discussed a few incidents from that night in Albuquerque. Ultimately they decided to suspend Jason High for one year. On top of that he was fined 10 percent of his fight purse, which comes to about $1,900. So remember kids, Don’t Push Refs!