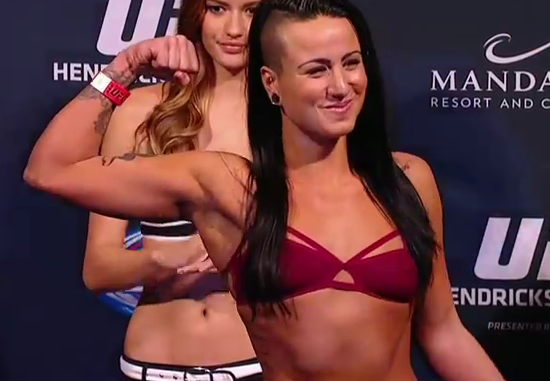 UFC women’s bantamweight fighter Ashlee Evans-Smith tested positive for hydrochlorothiazide, a water pill that prevents the body from retaining salt and aids in weight-cutting, this according to the Nevada State Athletic Commission.

The positive test result occurred after Evan-Smith’s UFC 181 loss to Raquel Pennington, who choked her unconscious at the event with a bulldog-choke.

The NSAC has since confirmed the news of the positive test to MMAJunkie.

According to Evans-Smith’s manager, they (He and Evans-Smith) still have not received notification of the alleged violation because of a mix-up in addresses. The NSAC sent the violation letter to an old address of Evans-Smith, which they had on file from when she fought at the “World Series of Fighting 10” event this past June in Las Vegas.

When Ashlee’s manager asked why he hadn’t been notified about the complaint prior to it becoming public knowledge, he said he was told, “We don’t have to call as long as they send it via certified mail.”

Evans-Smith was expected to appear before the NSAC during a meeting next Monday in Las Vegas, but has opted to phone into the meeting instead, as she is returning from a training seminar on January 11 (one day prior).

Ashlee Evans-Smith (3-1 MMA), via her rep, has denied the use of a banned diuretic.