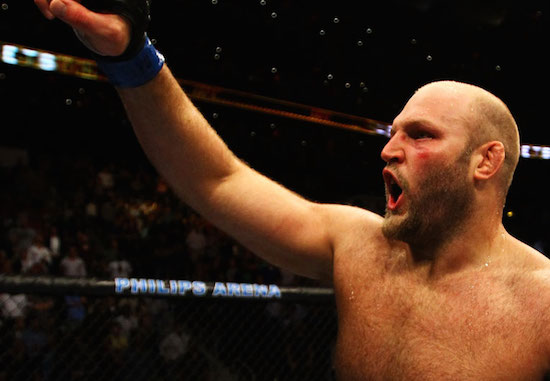 At this time last year, UFC heavyweight Ben Rothwell was undergoing what he now calls the “lowest point” of his career.

The veteran heavyweight was using testosterone replacement therapy at the time, which had been prescribed to him by his doctors.

After defeating Brandon Vera in dramatic fashion at UFC 164 in August of 2013, Rothwell would end up testing positive for elevated levels of testosterone.

That mistake would cost “Big Ben” in a big way, as the UFC handed the 33-year-old mixed martial artist a 9-month suspension.

“I didn’t know what I was doing, I felt like I needed it (TRT),” Rothwell admitted on Monday’s edition of The MMA Hour. “I was getting endocrinologists and doctors who were like: ‘If you can do this, then you should. This is about your health. This isn’t about fighting, it’s going to help you.’ Things of that nature. And I was angry, because you can’t point the finger at anybody, but it’s obvious that [PEDs] have been running rampant in our sport. A lot of guys do it. And I really felt like, man, I’m at a disadvantage. I know these other guys are doing it. Who knows what’s going on, hormones are messed up, you start thinking crazy, like, I need to do this.”

Ben talked about his experience coming off of TRT and suggested that UFC middleweight number one contender Vitor Belfort should look up to him for his efforts:

“It’s very, very hard to overcome the effects of being on it and not being on it, having to recover from that,” Rothwell said. “And I think a lot of people just counted me out. … I found out a lot about myself. Bigfoot, on the other hand, looked the exact opposite. He looked like a guy who came off of it and isn’t fighting the same. He was flat-footed and his looked like a punching bag, and I think that’s what people expected from me. That’s why I was a 5-to-1 underdog.

“It needed to happened,” Rothwell added of failing his drug test. “It really sucked, and I was at a really low point in my career when that came out, coming off the win (over Vera), because I felt tarnished. Everybody turns on you. They’re like, oh, you’re a cheater, you’re this and that. The best thing that could’ve possibly happened to me is that I beat this. I come back and I have the biggest win of my career, I cashed my bonus check, and I proved to everybody that I really did, I beat TRT.

“If there’s anybody who should look up to somebody, Vitor Belfort should look up to me and be like: ‘Wow, he did it. I can beat this. I can do it.’ Now, if he can, I don’t know. The guy’s been doing it a lot longer than me, and the longer you do that stuff, the more dependent you become on it.”

What are your thoughts on “Big Ben’s” most recent comments? Sound off Penn Nation!