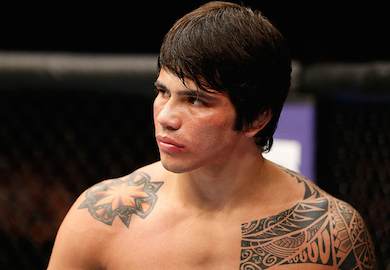 The last time fight fans saw UFC welterweight Erick Silva in the octagon, he was engaged in an all out war with top contender Matt Brown.

Although Silva lost that contest via third-round TKO, the fight itself did nothing but boost the Brazilians stock and fan base, as the epic battle is considered to be one of the best fights of 2014.

The talented young welterweight is scheduled to return to action at December’s UFC Fight Night 58 event in his home country of Brazil, where he will face former RFA welterweight champion Mike Rhodes.

The December booking forced Silva to change his plans of going to train at Jackson’s MMA in New Mexico, but he still plans on heading to Albuquerque in early 2015, as he told MMA Fighting:

“I was hoping that my next fight would be next year, but since it’s already close, I plan on going there after my fight, with no training camp, to evaluate my performance,” Silva stated. “I plan on spending some time there, but I’ll continue training at X-Gym.”

Training with the likes of Anderson Silva and Ronaldo Souza at X-Gym, there is no doubt in Silva’s mind that he will be ready for anything Rhodes brings at him on December 20:

“He’s a good athlete that is looking for his goals in the UFC,” Silva said. “I believe every fighter is well-rounded, everybody trains everything today. I know he’s a striker, but I’m prepared to fight everywhere the fight goes.”