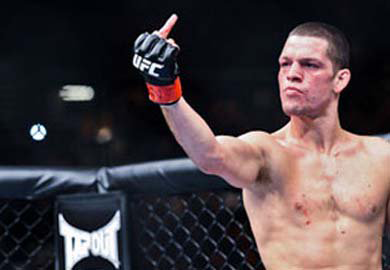 “I was actually thinking what the hell is wrong with this guy’s (Gray Maynard’s) corner and the ref for not stopping this fight because I was landing a lot of shots. I was kind of like ‘What the f—? Is this s— going to end? If he had experienced fighters in his corner and his coaches…those guys in his corner that Javier…Is it Mendez? Ok, so he’s in the corner and he’s supposed to be some pro? Some badass? He knows everything? Well if you know everything how did you not know your friend was getting his ass beat and just let him take those shots, you know?”

“We aren’t making millions of dollars. We’re making pennies for this fighting stuff.”

Critical of Gray Maynard’s corner in their last bout at the TUF 18 final event, Nate Diaz sounds off to Fight! Magazine, not only about the action’s of the AKA manned corner, but also on the amount they make inside the cage.

Nate’s disclosed payroll was $15k + $15k in his last few outings, though, Dana White, contests that he makes plenty.