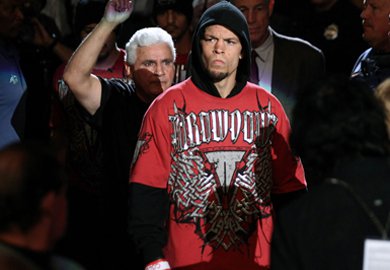 UFC officials announced today that top lightweights and former “The Ultimate Fighter 5” participants Nate Diaz (16-9 MMA, 11-7 UFC) and Gray “The Bully” Maynard  (11-2-1 MMA, 9-2-1 UFC), have verbally agreed to throw down for a third time at “The Ultimate Fighter 18 Finale” this November in Las Vegas.

Diaz and Maynard first met in the semi-final round of “The Ultimate Fighter 5,” where Nate was able to secure a guillotine choke on Maynard, forcing “The Bully” to submit in the second round. It is worth noting that their first meeting on “TUF 5 ” is not officially reflected in either fighters’ professional records.

The pair would meet again in the headlining bout of 2010’s “UFC Fight Night 20” event, which saw Maynard squeak out a split-decision win over the Stockton, California native.

Since then, both Diaz and Maynard have gone on to challenge for the UFC’s lightweight title, though neither man was successful.

After stringing together three straight wins over opponents Takanori Gomi, Donald Cerrone, and Jim Miller, Nate Diaz was given the opportunity to fight then-champion Benson Henderson for the UFC 155-pound strap at UFC on FOX 5 in Seattle. Unfortunately for Diaz fans, Nate was smothered by “Smooth” that evening and ended up losing via unanimous decision.

As for “The Bully,” after defeating Nate Diaz at the “UFC Fight Night 20” event, Maynard would go on to defeat perennial lightweight contender Kenny Florian at UFC 118 in Boston. That win would earn Maynard a shot at then-lightweight champion Frankie Edgar at UFC 125 in Las Vegas. After a 25-minute war, the title fight was ruled a draw, leaving Edgar with the belt and Gray empty handed. However, the UFC ordered an immediate rematch that would take place at 2011’s UFC 136 event in Houston, Texas. Frankie would prove to have “The Answer” to “The Bully’s” arsenal in the rematch, scoring a fourth-round KO over the former “TUF:5” cast member.

Both men, Diaz and Maynard, are coming off losses in their most recent octagon appearances. Nate suffered a second-round TKO loss to Josh Thomson at April’s UFC on FOX: Henderson vs. Melendez event in San Jose, California.

Meanwhile, Gray Maynard was last seen in the cage at UFC 160 in Las Vegas, where he suffered a viscous TKO loss at the hands of Canadian T.J. Grant.

“The Ultimate Fighter 18 Finale” takes place November 30, live from Las Vegas’ Mandalay Bay Events Center. While it has yet to be made official, it is expected that the Diaz vs. Maynard fight will serve as the evenings main event.

Who do you see winning the rubber match? Let’s hear it Penn Nation!