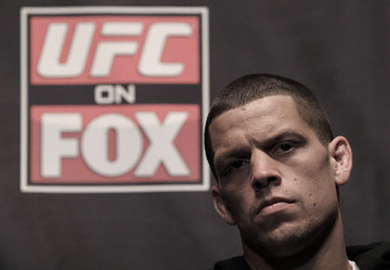 The disciplinarians at the UFC are keeping busy this month.

Fellow UFC lightweight Nate Diaz did not approve, taking to Twitter to express his thoughts on the situation.

“I feel bad for pat Healy that they took a innocent mans money and I think the guy who took the money is the biggest Fag in the world ..”

As a result of his homophobic statement the UFC has decided to suspend Diaz for 90 days and fine him $20,000.

Zuffa, LLC, owner of the Ultimate Fighting Championship®, released an official statement on their website today:

“UFC lightweight Nate Diaz has received an immediate 90-day suspension and $20,000 fine for violating the UFC’s fighter code of conduct. The language used in his tweet was regrettable, offensive and inconsistent with the values and culture of the organization, and is not tolerated.”

“The money will be donated to charity.”

The tweet has since been deleted from Diaz’s Twitter account. He joins Matt Mitrione and Anderson Silva as the three fighters to be reprimanded by the UFC for not adhering to the organization’s Code of Conduct Policy.

The charity receiving the fine money has yet to be announced.