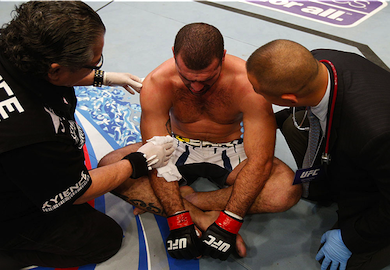 Former UFC light-heavyweight champion, Mauricio Rua suffered his first two-fight losing streak of his career as he lost to Chael Sonnen last Saturday at the inaugural UFC on FOX Sports 1 card, on which he headlined. ‘Shogun’ didn’t resemble the fighter that made him a champion in Pride and the UFC. Instead, he was handled by Sonnen and choked out in the first round after threatening with barely any offense save for a takedown that resulted in little more than speed bump for Sonnen.

“Shogun” changed his coaches, trainers and managers several times during his UFC run, and his brother believes that is one of the problems.

“He has a lot of shady persons around him, people trying to take advantage of him,” he said. “People from his camp said I wasn’t good for Mauricio because I made him nervous when I was on his corner, and he listened to that, so I decided to leave. If something is wrong I would point it out, I wouldn’t just lie to please him.”

Murilo stepped down from cornering his younger brother after receiving advice to do so. During his critique, he stated that Rua simply didn’t do the right things to defend against the attack of a wrestler and skilled grappler such as Sonnen:

“I was surprised,” Murilo said. “In my opinion, Mauricio played the wrong game. He should’ve moved more to avoid the takedowns. Fighting on half guard against a wrestler isn’t a good strategy. He should have brought Chael to his guard when he got taken down, tried to sweep him or land some punches. But Sonnen got his neck, unfortunately.”

Mauricio Rua is only 31-years-old but his continued participation in MMA wars was brought back in to the spot light numerous times during the build up for this fight and seemed to show that in MMA years, he is much older. As for a drop to potential change in weight class to preserve his career in what could be the latter stages of said career, Murilo seemingly throws that notion out the window citing his brothers natural weight of 230-pounds, making it difficult for his brother to drop to 185-pounds:

“My brother never went on a diet,” he said. “But I believe it’s hard for him to (fight at middleweight), he weighs around 230 pounds. I don’t know what he’s thinking for his future, I’ll talk to him when he gets back home.”