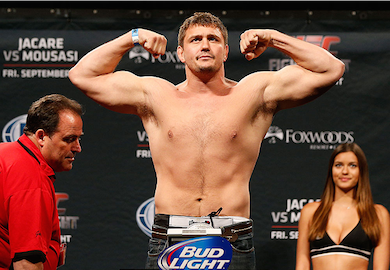 Matt Mitrione is fresh off his quick first round KO over Derrick Lewis at UFC Fight Night 50 earlier this month, and is looking for a quick turnaround.

Mitrione is 8-3 in the UFC, and is looking for a step up in competition after extending his win streak to two. His sights are set on Andrei Arlovski, who has experienced a career resurgence, and is also on a two fight win streak.

Mitrione spoke on UFC Tonight about the potential matchup, and how he was led to believe if he beat Derrick Lewis, he would get a higher profile matchup.

“I need to make up for the step back I took,”

The step back Mitrione is referring to may be his bout with Stefan Struve at UFC 175, which was cancelled last minute after Struve feinted backstage.

Arlovski may be sidelined for up to 6-months however pending an x-ray of his wrist. He is coming off a quick KO over Bigfoot Silva.

Do you want to see this matchup?