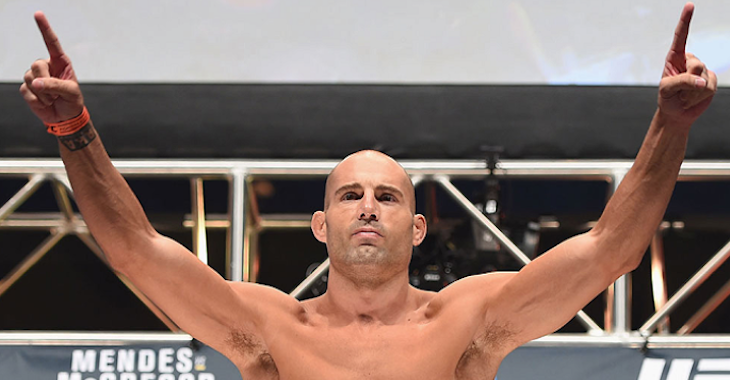 After over ten years of fighting for the Ultimate Fighting Championship, Mike “Quick” Swick has chosen to retire.

Swick was one of the many UFC main-stays that took part in the first season of “The Ultimate Fighter”. While he was bested by the likes of Stephan Bonnar and Forrest Griffin in the competition, he spent longer as a UFC competitor than both of those men.

He boasted an impressive UFC record of 10-3 before suffering a rough knockout loss to “The Immortal” Matt Brown in 2012. Swick spent some time away from the octagon to concentrate on opening a gym in Thailand before returning to the biggest event of the year at “UFC 189” in July against Alex Garcia.

Garcia won the bout by way of unanimous decision, and Swick offered no excuses after the fight was over. Swick broke the news of his retirement on his Facebook on Thursday afternoon:

July 11th 2015 at UFC 189 was officially my final fight. I was healthy and injury free for the first time in 8 years but still couldn’t put my game together. There comes a time when every fighter realizes he is older and not what he use to be and I want to acknowledge this and stay true and honest to what I have always said, that I will leave when I know I am done. It’s a hard thing to do considering everyone wants to go out on top, unfortunately when your actually on top, you never wanna go out.

It’s unfair to the UFC, the fans and to my family and friends for me to keep chasing this career while giving performances that I am not proud of.

I remember sitting in class during high school(’98) watching UFC’s with the football team during off season and telling them I will be there one day. Now at 36 years old, I have been contracted with the UFC going on 11 years and it has completely changed my life. I am very proud to have fought and been a part of this organization for so long.

Though I am retiring from fighting, I will stay a big part of this sport as I continue to build fighters and grow my dream gym AKA Thailand. This gym is a massive project that has taken us 5 years to put together and once we are done, it will be the largest and most unique fight gym in the world. I am so proud to have such a great team of people behind it and I will now give my full effort towards its progress and the business surrounding it.

I want to thank everyone out there who has helped me over the years… My family and friends, Javier Mendez/Team AKA/AKA Thailand and all the coaches and fighters that have been a part of them, the UFC, all my sponsors, and finally the wonderful fans that have made this sport so great! It is because of all of you, that I was allowed to live my dream and that I will now be able to continue living it after my fighting career.

I also want to thank the haters and negative people who have entered my life from time to time. The fire that you guys created inside me is what has maybe helped me the most in my attempts to prove you wrong and succeed through your doubts. Thanks for being that fuel when I was running low on gas.