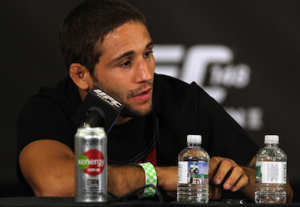 “Honestly, watching his last fights, I couldn’t see any sign of evolution. He basically bets on what he is good and he’s doing always the same things. I think that this fight will be excited to the fans because of that, since I have completely changed. There are so much things that I’ve learned in the stand up game. Even my Wrestling is better. There was a moment in our first fight that I took him down and I felt a size difference because I was a lot smaller than him at that time but now this difference won’t be that big. I know that I have an athletic capacity to face him equally, possibly higher than his capacity. I feel that my striking, my Jiu-Jitsu and my Wrestling are better now. I feel that I’m now a well rounded martial artist.”

“TJ’s win was big for our team. We’ve come too close of winning the title so many times and he pushed us for beyond that limit. That is what we needed. We couldn’t decode the puzzle and TJ was the first able to do it. We can look what happened and do more. We can train in the way that he trained and implement what he did in our camps. I think that we found the recipe to beat them and I want to show this on August 2.”

In a recent interview with Combate.com, top UFC featherweight Chad Mendes discussed his upcoming bout against Jose Aldo, slated for UFC 176 in August.