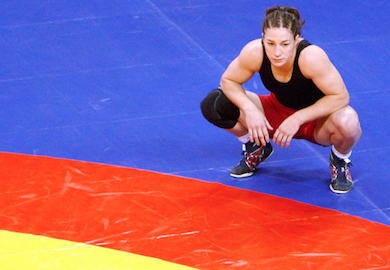 “The coaches are responsible for breaking him, not anybody else. During these practices, we are always down on points. We have people rotating in on us. They are people in our weight class that are eating whatever they want, they’re fresh because they get breaks and we don’t. They have no pressure on them. It’s a little bit ridiculous because these practices are designed to break us. These coaches won’t stop until you are flaking out, until you are at your absolute lowest point. That’s the way it’s been in wrestling forever. To say that he made [Cormier] cry, that’s just crazy to me.”

Ahead of their UFC 170 bouts, former Team USA Olympic Wrestlers Sarah McMann and Daniel Cormier, both find themselves revisiting days passed from their stint on the Olympic Wrestling team.

With Pat Cummins stepping in to face Cormier on short-notice and his claims of making him cry in wrestling practice, McMann has come to the defense of D.C. in this statement (above) she gave to Ariel Helwani.