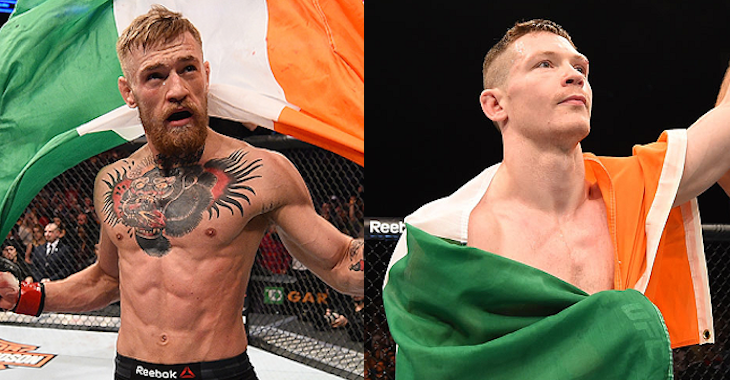 Joseph Duffy put on another impressive showing in the octagon this past Saturday when he disposed of Ivan Jorge with an arm triangle in less than five minutes.

After Duffy’s UFC debut at UFC 185, his coach mentioned that Duffy may be moving down to featherweight to chase a bout with Conor McGregor. The two Irishmen met years ago before they were UFC stars in a promotion called CWFC. Duffy submitted McGregor with an arm triangle in less than a minute, but that was long before McGregor evolved into the fighter he is today.

“I’m going to stay at 155,” Duffy said at the UFC Fight Night 72 post fight presser. “I’m pretty comfortable here, and I feel like I can improve a little bit. So I think this weight is perfect.”

Instead of having his sights set on UFC featherweight gold, he wants to headline the next UFC card in Dublin.

“I just quietly do my own thing,” he said. “I know in time, I’m going to keep putting in those performances and they’ll take note. That’s what we’re in the game for. We’re here to fight the top guys in the world. So whoever they put in front of me, I’ll be glad to be on that Dublin card, whoever it is.”

“That’s a dream come true if I headline Dublin. That’s the kind of fight I want to be in.”

Is Duffy ready to headline a card in Dublin, Ireland after only two UFC wins? Share your thoughts in the comment section below!