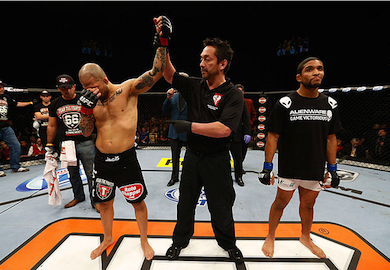 “I don’t understand English, so I didn’t really quite understand what referee told me at the neutral corner. I am not making any excuse here, but when adrenaline is pumping its hard to understand the language I am not familiar with. So when he waved off the fight, I actually thought I won by a doctor stoppage. Then, my manager came to me told me I am disqualified.

No more back flip for me, unless I am told okay by my manager after the fight. I promised this to Sean Shelby as well. I am shamed about that back flip.

I felt shamed. So I went over to apologize to Akira, and he asked me ‘What happened?’ in Spanish, and I could only say, I am sorry, that knee wasn’t unintentional, but it was illegal, so I am the one who needs to take the blame here.”

In a post-fight interview with Damon Martin of FOX Sports, Maximo Blanco expressed his concern for the illegal blow he delivered to the face of Akira Corassani at Saturday’s TUF Finale event.

Corassani received a concussion and a nose that was broken in five places in the first round of action against Blanco.

If you missed the infraction check out the replay here.