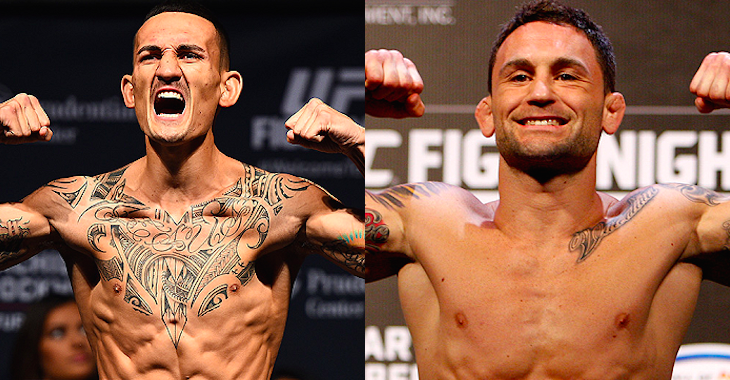 Max Holloway’s win over Charles Oliveira at “UFC Fight Night 74” may have been anti-climactic and indecisive, but “Blessed” made it clear he has no interest in a rematch with “Do Bronx”. Instead, Holloway is looking to take a step up in competition by challenging Frankie Edgar for featherweight supremacy at a potential UFC event in Hawaii!

Jose Aldo, Conor McGregor and Chad Mendes have all tied up the title picture in the stacked featherweight division leaving Frankie Edgar hanging high and dry looking for an opponent. Edgar has the choice to wait for the champion after Aldo and McGregor square off at “UFC 194”, but sitting at home does not pay the bills. The former lightweight champion is riding an impressive four fight win streak over the likes of BJ Penn, Cub Swanson and Urijah Faber. Edgar now sits atop his division under only the interim champion, two spots above Holloway.

Holloway secured his seventh win in a row on Sunday evening when Oliveira fell victim to a freak injury. Oliveira shot for a takedown and it seemed as if Holloway had successfully fought it off. While Holloway surely fought the takedown off, Oliveira clutched his shoulder as soon as he made it back to his feet before falling down again.

Regardless, the win was big for Holloway as it was his first main event appearance. Before that defeated a who’s who of the featherweight division with wins over Cub Swanson, Cole Miller and Andre Fili. After his win tonight, Holloway called out Frankie Edgar for a potential UFC fight in Hawaii.

Holloway is ready to take the next step up in competition and Edgar seems like the most likely candidate for the job.

Would you want to see the two square off? Share your thoughts in the comment section below!