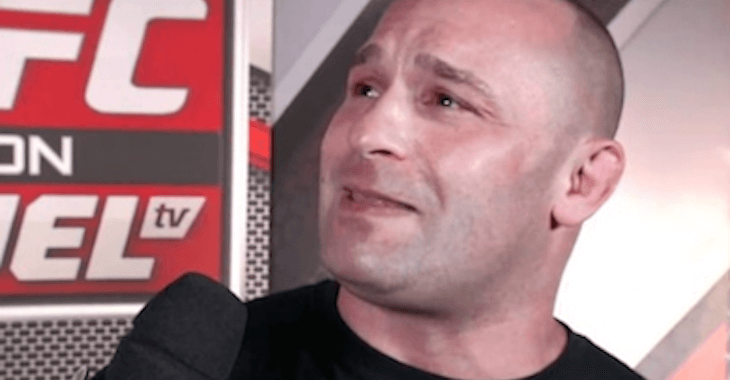 Over 6 years have passed, and Matt Serra still can’t get over not getting the best of Matt Hughes in their “Fight of the Night” at UFC 98. Serra spoke with UFC commentators Jon Anik and Kenny Florian about his grudge with the UFC Hall of Famer (transrcribed by MMA Fighting):

“I can’t stand that guy,” Serra said. “I don’t even want to say anything because I know I’m not going to get to smack him or anything. If they said, ‘Matt, let’s do this,’ I’d say, ‘I need six months,’ because I’m a professional. I never missed weight. I’d have to get into a training camp. I’m not doing that for my health.”

Serra had some choice words for Hughes and his role with the UFC since retiring in 2013 as UFC Vice President of Athlete Development and Government Relations.

“The guy’s talking s**t because he’s hoping,” said Serra. “Dude, you’re best friends with Dana. He gave you a fake ass job. You f**king hall monitor. Come on. Is that guy working harder on the farm or with his fake ass hall monitor job. Fighter relations? Are you f**king serious? If [UFC fighters] have a problem, who are they going to call? I should have that job. Who are they more likely to call? Me or him? I should have that f**king job.

“Seriously, he should just sit back and collect his checks pretending he’s doing something. If the UFC said this is actually catching wind and people want to see the fight I would do it the proper way and it would f**king happen. But if it’s not going to happen I’m not going to sit here and just flap my gums.”

Would you want to see the UFC veterans come back for a grudge rematch in the Octagon? Let