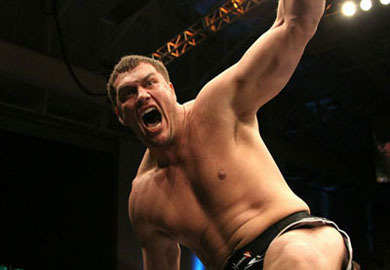 Yet another fight was announced Wednesday evening for July’s UFC on Fox 8 card: A Heavyweight showdown between former professional football players Brendan Schaub and Matt Mitrione.

A.J. Perez from Foxsports.com confirmed the bout on Twitter.

Brendan “The Hybrid” Schaub (9-3) is coming off a unanimous decision win over Strikeforce import Lavar Johnson at UFC 157. Schaub is looking to put together a new win streak after previously dropping two in a row to Ben Rothwell and Antonio Rodrigo Nogueira. In his fight with Johnson, we saw Schaub trade in his usual stand-and-trade fighting style for a safer, wrestling-based style that ultimately won him the fight.

Matt Mitrione (6-2) has recently made headlines after being suspended by the organization for transphobic comments made about transgender fighter Fallon Fox on an interview with the MMA Hour. Prior to his suspension, Mitrione posted an impressive first round knockout victory over Phil De Fries in Sweden. Before the bout, he was riding a two fight losing streak to the likes of Roy Nelson and Cheick Kongo.

UFC on Fox 8 takes place on Saturday, July 27th at the KeyArena in Seattle, Washington.