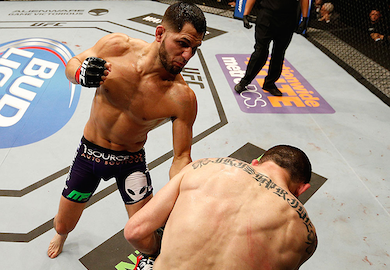 Jorge Masvidal defeated Pat Healy this past weekend at UFC on Fox 11 via decision. Masvidal looked good in the fight, dominating Healy for most of the fight while displaying a clean standup game. Healy spoke to the camera in a behind the scenes video of American Top Team’s fighters who went 5-0 for the night.

In the video Masvidal says:

“I feel good though, ready to fight next week. Coming back, I’m going to get that belt one way or another. Good way or the bad way. Strong arm robbery, whatever I got to do.”

You can see the full video here, and you can catch Masvidal’s clip at the 8:22 mark.

Masvidal extended his UFC record to 3-1 with his win over Healy, and rebounded from a decision loss against Rustam Khabilov.