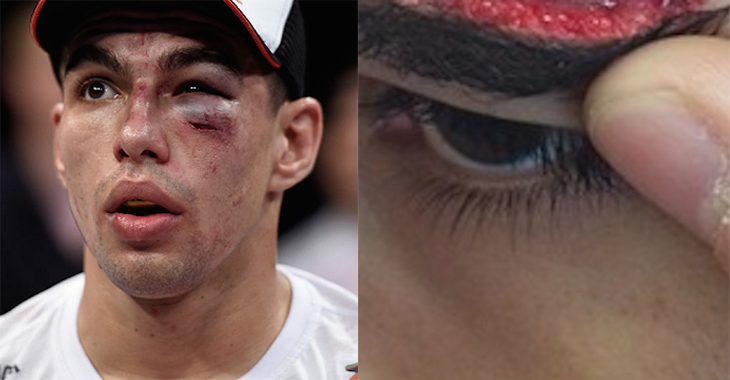 Lucas Martins’ bout with Mirsad Bektic did not go as expected, to say the least. Martins suffered a gash above his eye days before the fight and ultimately fell victim to technical knockout loss thirty seconds into the second round.

The bout kicked off the Fox Spots 1 Preliminary bouts and brought the small crowd in attendance to their feet, letting the viewers at home know they were about to miss out on an exciting card.

Lucas Martins took to Instagram to not only share a close up of the brutal cut he suffered before the fight, but to express his thoughts on his loss. Check out the full picture below!

Thank you all for the support, it was not this time the victory came, I accepted the fight with little time, and I ended up hurting me 10 days of fighting, but I did not want to leave the fight then I continued training even hurt with eight points in the eyebrow taking one day before traveling to goiania, I know that’s no excuse for my defeat, but ended up in my head afraid to open at the time of the fight, that’s what happened, but now it’s ball forward, it will not stop me thanks to all who support me, I’ll come back stronger this does not stop me !!!! Thank my team to always be at my side, every family #chuteboxediegolima and all the team #guigouti , my family to always be by my side at all times, all my fans, friends, students, will come out on top and will bring much joy to all you guys !!! Excuse me !!!!