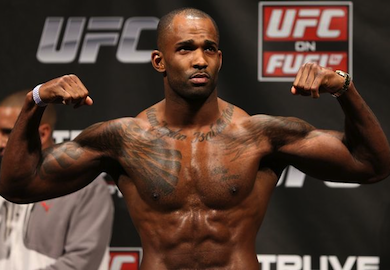 Jimi Manuwa admits that before he started training, he idolized MMA legend Mauricio ‘Shogun’ Rua. However, after the two signed to fight in the main event of UFC Fight Night 56 on November 8th, that changed.

Manuwa spoke with MMAJunkie about what it will be like fighting someone whom he looked up to.

Manuwa, who is 14-1 in his MMA career, suffered his only loss to Alexander Gustafsson, the man he is now training with in preparation for his November 8th bout with Shogun.

“I’m at Allstars gym now, and it made a lot of sense to me. I was going to train with Alex before our fight came up. Then our fight came up, so we couldn’t train together. We had to wait until after our fight to start training together.”

“I like to challenge myself, and I knew I wouldn’t be fighting in the U.K. my entire career. I knew I would have to leave my comfort zone eventually, and I’m ready for it. That’s why I’ve taken myself to Sweden to train, so I’m not doing what I usually am.”

“There’s going to be no respect in that cage until my hand is raised, and then the respect will come. We’re here to fight. He’s here to beat me up, and I’m here to beat him up.

“I think ‘Shogun’ is a great fighter. He’s always dangerous, even when he’s beat up. After I beat him it’s going to be nothing but big fights for me.”