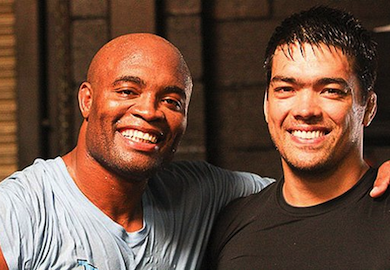 “I always say Anderson is on another level. He was the champion for about six or seven years. We even talked about it. He said he already was the champ for a long time, that he wants to remain in the promotion and have super fights. And in case we have to fight, he said he’d even forgo any claim to the belt so I could have my shot.”

Obviously for this statement to hold any water Anderson Silva must first successfully defeat Chris Weidman next month. But if he does, sharing the division rankings with longtime friend and teammate, Lyoto Machida, poses an interesting problem for the pair.

Machida recently told us that he plans on contending for the title, even if that meant facing off with Anderson down the road. Now, in a recent interview with MMAJunkie.com, he clears the air saying it will never come to that.