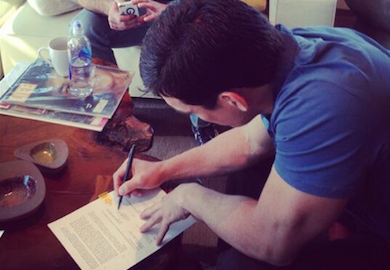 Unbeknownst to many, former UFC light-heavyweight champion, Lyoto Machida completed the last bout on his contract when he knocked out Mark Munoz in the first round of their recent fight.

I even have it on good authority that he toyed with free agency and took offers from other popular MMA promotions.

In a recent tweet sent out by his manager, Ed Soares, Machida opted to stay with the world’s leading MMA promotion and as evidenced by the photo has signed a new deal with The Ultimate Fighting Championship.

It's a done deal!!! Thank you @lorenzofertitta @danawhite @ufc pic.twitter.com/9PK8gnZU3H