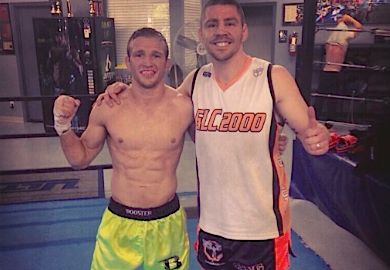 “I’m going to come and help out for the fighter camps, but my business will come first. But I’ll definitely always make time for T.J. and a couple of the guys. We have a special bond, and it’s not something I will ever let go.”

“T.J.’s my boy. I would (coach T.J. against Urijah). This is one of the things about T.J. and Faber. They fight once or twice a week in the gym. Why not get paid for it?”

“There’s a couple of guys who are special to me, (and) T.J. is definitely the No. 1 special guy to me, for sure, 100 percent. He’s a guy that we have the tightest bond, he’s learned the most, gained the most, and he’s become a martial artist.”

“My main pupil has always been T.J., and it was really kind of a storybook ending. This last year and a half, it was something special.”

“I’m talking to you right now because of Urijah Faber. He’s the guy who put together this team; he’s the guy who called me to come out and help him coach.

“I wouldn’t be in this position without him, nor would T.J. T.J. didn’t walk into Ultimate Fitness. Urijah went out and recruited him; he recruited Chad Mendes, also. So it’s not like they were homegrown champions. He’s a mastermind himself. He has a great eye for talent”