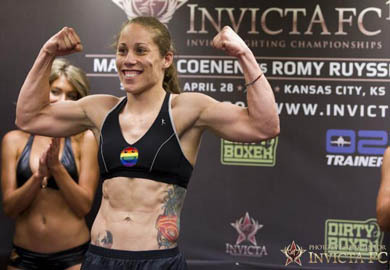 A female bantamweight bout has been booked for The UFC’s Fight Night 31 event in the form of Liz Carmouche vs. Alexis Davis.

UFC Fight Night 31 or ‘Fight For The Troops 3’, is set to go down from Kentucky’s Fort Campbell on November 6th. The free televised card will air on the new Fox Sports 1. In the main event, Military sniper, Tim Kennedy, is set to take on former UFC light-heavyweight champion, Lyoto Machida, in his middleweight debut.

Liz Carmouche has etched her name in the history books as being the first female to ever challenge for a UFC title. She came up short in her debut against Ronda Rousey but has since bounced back with an emphatic win over Jessica Andrade this past July. She is also a military veteran.

Davis is a highly regarded female prospect who earned her way to the UFC with successful runs under the Strikeforce and Invicta FC banners. She recently made her UFC debut with a dominant decision victory over Rosi Sexton this past June.

The updated Fight Night 31 card is as follows: