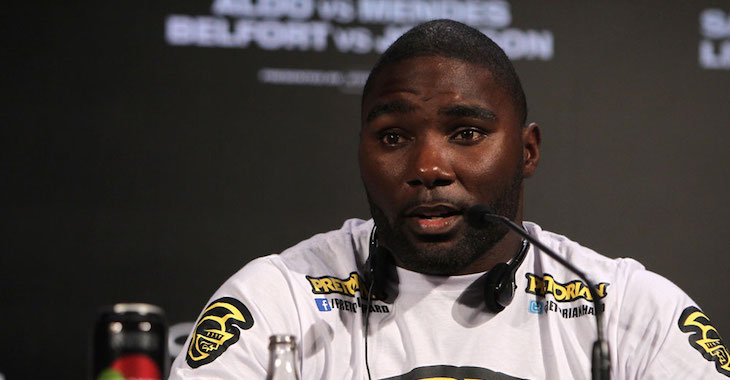 It was announced yesterday that UFC light heavyweight Anthony ‘Rumble’ Johnson would no longer be fighting Jan Blachowicz, and instead will fight KO artist Jimi Manuwa at UFC 191.

After the fight was announced the two wasted no time going back and forth on Twitter, exchanging trash talk. Although, this feud wasn’t exactly fueled by rage or hatred, instead, The Lion King seemed to be a major focal point.

@POSTERBOYJM I need a new rug for my house. You'll look really nice on the floor when ppl visit.
I'll tell them it was a easy kill…

@Anthony_Rumble hahahaha. Ur good at this shit. This ain't Cecil the lion my friend. I come from deep in the jungle and u have no gun.

@POSTERBOYJM check my resume and see how many kills i have… remember I'm Scar and you're Mufasa!

@Anthony_Rumble your resume is good, but know that u are facing a different beast as u have before and this ain't no cartoon. Shit is real 👹

@POSTERBOYJM I expect real and ready for real. Just make sure you're there and I'm not fighting alone.

@Anthony_Rumble now u go check my resume!! This ones for the fans!! #UFC #lionseatfirst

@POSTERBOYJM ooooooo I wouldn't accept the battle if you're resume was weak. Welcome to the big league!

@Anthony_Rumble glad u recognise , this fight don't need no more talk. We are the 2 biggest bangers now let's bang

@POSTERBOYJM you are right, we are the biggest and best bangerz alive.
Sept 5th everybody keep your eyes open! #therealmainevent