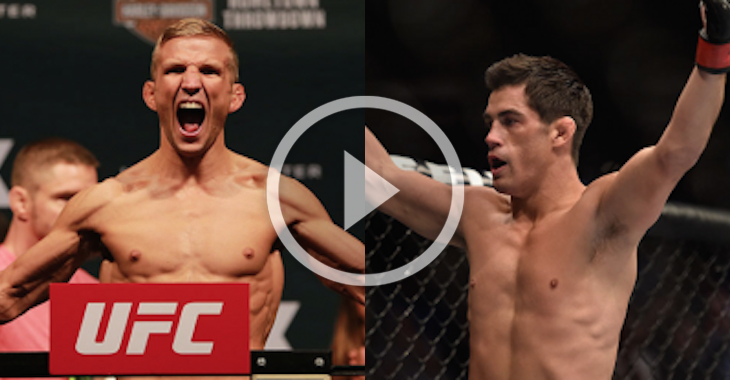 The UFC bantamweight champion TJ Dillashaw blew people away with his dominating performance over former champ Renan Barao at UFC on FOX 16. He controlled the fight from the start to the fourth round finish, where he had Barao up against the cage and began unleashing furious punches until the referee stopped it.

Ever since then everyone keeps talking about a potential fight between him and former champ Dominick Cruz. The two get compared for their styles and fans and media agree that it’s the biggest fight for both men right now. Only problem is that Cruz has been injured more often than not the last few years and is still currently healing up. However that hasn’t stopped Cruz from talking trash and calling Dillashaw a “wannabe” who hasn’t really beaten a real champion.

Well, last night on Stud Show Radio, the champ took a moment to fire back at Cruz and boy did he let him have it:

“The only thing, the difference between me and Cruz is like yeah he’s got footwork but you don’t have to be scared of the guy, he hits like a little b*tch. If you watch any of his fights, except for his last one, which was like his only finish ever, which is why he’s all excited now. Dude you finished one dude.”

“He’s trying to talk sh*t about what I’m doing, but it’s like yeah you can have footwork but you do nothing but hang out to get a decision. I’m going to knock him the f*ck out.”

Check it out in the clip above!
Stud Show Radio runs every Tuesday and Thursday at 8:00 PMish PT. Watch past episodes at the official Stud Show Radio Youtube Channel, or visit StudShowRadio.com for more information.