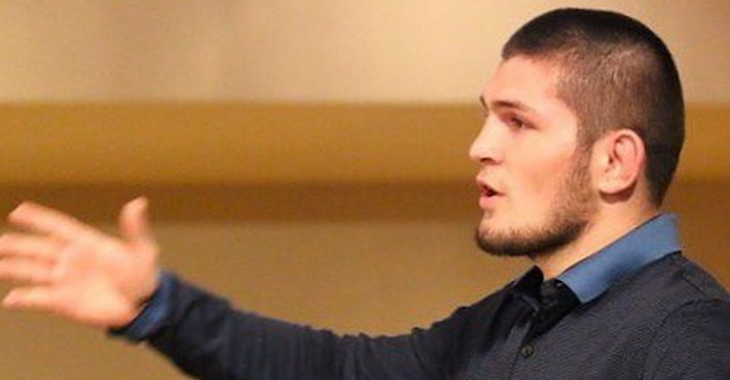 On Saturday evening, Khabib Nurmagomedov got into an altercation with some members of the Diaz camp at the World Series of Fighting event in Las Vegas, Nevada.

The altercation started in the pit of the showroom where the event was taking place. A brawl broke out in the stands, but it was separated before anything got out of hand. Nurmagomedov’s crew and Diaz’s crew met once again OUTSIDE of the showroom in a brawl where chairs were thrown and police were involved.

Nurmagomedov has since spoken out about the event, claiming he has contacted Dana White and other UFC officials with a request to settle his beef with Nate Diaz inside the octagon. Khabib posted the picture below with the following caption:

“Aleikum all, get unrealistic number of messages about yesterday’s incident, I can tell you simply: fights between guys occur, there is nothing unusual, but since we’re both UFC fighters, it has become a big hassle this news, yesterday we faced in the tournament to Nate Diaz, and he started verbal fight, after he began swinging. Like a professional fighter, I was aware that it’s happening out there where a lot of people, I kept myself in pation, since it was a live broadcast of the tournament WSOF on TV, it may prove a large number of witnesses. I do not want to describe all the details, but when the brawl get hot, that sucker run away from me three times, but I swear by God I am not in debt remain, and remained ever. Will see what’s happen next, I’ve already asked for a fight with him at UFC bosses, but judging by the speed as the Diaz ran, it’s hard to believe that the fight will take place. #run”

On Twitter, he took a much more direct quote with the trash talk:

Do you think they will get to settle this in the octagon? Share your thoughts in the comment section below!