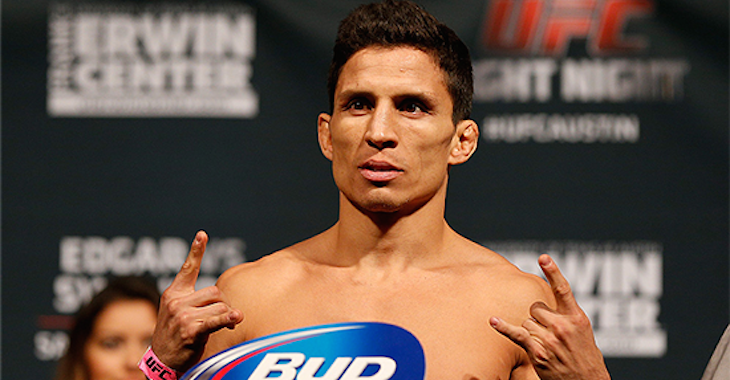 It’s another tidbit from your favorite MMA podcast, Stud Show Radio. This time around we have UFC flyweight Joseph Benavidez talking about MMA judging and the effect a crowd might have on a fight.

A listener called into the show and discussed an idea he had for a new judging system. Basically he said the rounds could be judged in two parts, A and B. Each half would receive its own score and you would receive points after the round, depending on that score. Benavidez responded with:

“There’s so much room for error already and all they have to do is pick a 10-9. So the more points and half points and things you give them to judge, the more there is for them to mess up.”

“I wouldn’t mind scoring an overall fight. Just at the end of the fight, who won?”

One of the hosts, Chris Carlino aka Sir Stud Boy, brought up an interesting idea about a fights cards momentum. He basically said that if the first fight of the night ends in a big KO, then it seems that the rest of card is also exciting. Carlino asked Joe-Jitsu to give his thoughts on fight card momentum.

“It’s weird; I think it’s all chance man. Every fight, it’s not really a card, it’s like every fight is a new fight. That’s how I look at it.”

“I’ve watched fights in the back before and been super pumped up and inspired but almost calm too because I’m like oh those guys are throwing down, no big deal it’s just a fight. The one before you don’t get to see that much, but if the one before you was super awesome and you come out and the crowd is fu*cking riled up and ready to go, I mean, I guess it could affect it. Like I said I don’t really know because either way the crowd could be silent or not or be whatever and I’m going to do the same sh*t.

Joe’s Clip Is Below: