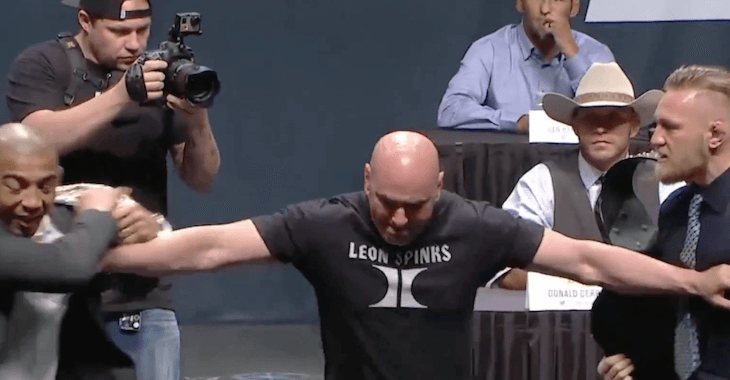 Here we go again. UFC featherweight champion Jose Aldo and interim champ Conor McGregor were both in attendance at today’s UFC ‘GO BIG’ event and did plenty of talking back and forth, well, actually, McGregor did quite a bit of talking during the whole event, but anyway.

The two eventually stood up and faced-off and what do you know, things got a little chippy between the two of them. It almost looked Aldo tried to ram his head in to McGregor, who then backed up.

Dana White and security stepped in and they squabbled a little bit more until Aldo had to leave to go to a wedding.

‘UFC featherweight champion Jose Aldo and interim champion Conor McGregor met face-to-face once again at the GO BIG press conference at the MGM Grand in Las Vegas ahead of their Dec. 12 title fight at UFC 194.’