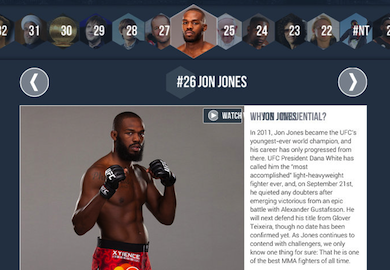 In 2011, Jon Jones became the UFC’s youngest-ever world champion, and his career has only progressed from there. UFC President Dana White has called him the “most accomplished” light-heavyweight fighter ever, and, on September 21st, he quieted any doubters after emerging victorious from an epic battle with Alexander Gustafsson. He will next defend his title from Glover Teixeira, though no date has been confirmed yet. As Jones continues to contend with challengers, we only know one thing for sure: That he is one of the best MMA fighters of all time.

The UFC champion finds himself in the 29th slot out of 49 honorees.