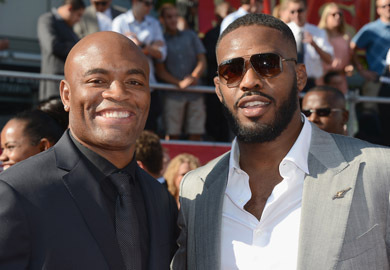 “To see such a magnificent career and legacy get tarnished by two losses, two kind of flukish losses – I wouldn’t call the first one a fluke – it sucks,” he said. “It leaves a weird taste in your mouth, like it’s not supposed to end that way. What I’m hoping is that people remember Anderson for all the magnificent things he’s done, and all the lives he’s touched, and all the people he’s inspired, and I’m hoping that Anderson just stays away from the sport and continues to be an inspiration outside of the octagon… Not fight again. Anderson can do seminars, he can do motivational speaking, he can help all the kids in Brazil, I mean he’s such an idol. His greatness has just begun, but I think in the Octagon, I think it’s been already fun.”

In a recent interview with a CBS Local Radio Station out of Washington D.C., UFC light-heavyweight champion, Jon Jones gave his thoughts on the career and legacy of Anderson Silva.