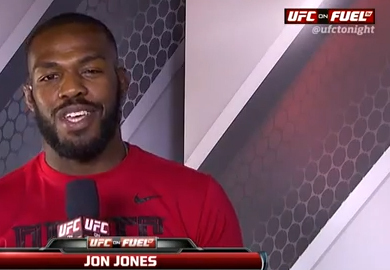 Jon Jones has quickly become one of, if not thee most dominant champion in the current UFC landscape.

There was a time, when BJ Penn, GSP and Anderson Silva ruled the UFC rankings, often dubbed as the three-headed horse of the promotion, but those days are gone and now Jon Jones sits atop that prestigious ladder.

The options are seemingly endless for Jones. A move to heavyweight, a fight against Anderson Silva or just remaining at 205 to continue his run of domination.

His manager Milki Kawai told MMAWeekly that the champs main goal is to break records and the super fights and shifts in weight class will have to wait.

I’ll just tell you this, I wouldn’t be surprised if Jon fights two more times this year. That’s very aggressive and I know that’s crazy, but it’s something that he discussed with me and we talked about it. I told Superman to relax a little bit, you’re injured right now, but he’s got an aggressive timeline in his head. Certain goals and accomplishments that he wants and we’re looking to get that record.”