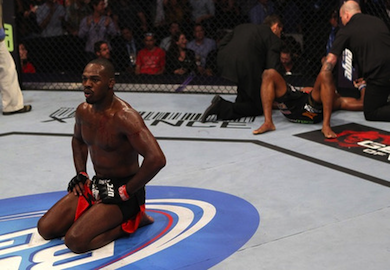 After a long day full of media obligations, Jones sat down with MMAFighting.com’s Ariel Helwani and asked the journalist for some different questions.

Helwani obliged, noting that UFC president Dana White had recently made the case that Renan Barao was the best pound for pound fighter in MMA.

“I can’t argue with what Dana says,” replied Jones. “Ultimately, Dana’s not a fighter, he’s a promoter. I can’t always speak for his logic when he says certain things. His word really doesn’t… it doesn’t change anything. He’s our boss and everything, I mean, but he’s no sensei, so whatever.”

Helwani continued to press, asking Jones if he feels like Dana promotes him as well as he does other fighters, notably UFC women’s bantamweight champion Ronda Rousey.

“It’s hard to say,” replied Jones. “It’s hard to say. But at the end of the day, all I have to do is win fights, and hope for the best. I would like to have a great relationship with him.”

“I don’t really want to comment on it too much. I think it’s apparent where I rank with him. I’ll just say I’ll never be Chuck Liddell, but at the same time, you know, it’s whatever, it’s all cool. As long as we respect each other, and I do the best I can do for the company, everything will be cool.”

Helwani then suggested for Jones to play pro-wrestler and go total heel,

“I’m not quite ready to go total heel,” said Jones. “I love the people. And I definitely want to be remembered as a positive force and light to the sport, and to people’s lives. And that’s what I am going to continue to fight for. I haven’t quite given up on the people.”

“That’s not my thing. I do me. I have fun with being who I am. Sometimes it goes over very well; other times I get hated on for things. But either way, I’m taking care of my family. I have a great job. I feel good. I feel good with all of it. I let things take care of itself. At the end of the day my heart’s still ticking, by body’s still healthy, my mind’s still healthy, and I’m just grateful for everything, you know?”