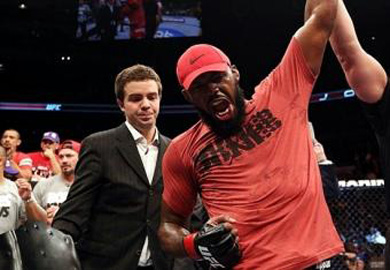 UFC heavyweight turned light heavyweight Daniel Cormier beat Patrick Cummins in his debut at 205. Who saw that one coming, right? Any way, after Cormier finished Cummins he felt like he deserved the next title shot.

Cormier went on FOX Sports’ Great Debate MMA Podcast and pleaded with champ Jon Jones to give him a shot at his belt. Here’s what he had to say,(Thanks to MMAFighting.com for transcribing)

“This is a message for Jonny Bones Jones: Hey, Jon. This is Daniel Cormier. Bro. Brother. I’m asking nicely. I’m not aggressive. I’m not trying to be confrontational, Jon. I’m just asking, would you be willing to give me a chance to fight you. Please, Jon. Please, brother. Make the decision.”

“My response to [Cormier] is: Hey, DC. I really respect what you’ve done with losing that weight. I think that’s extremely inspirational to a lot of people. It shows what type of heart you have that you’re willing to sacrifice those meals and get yourself to 205 [pounds].

“First and foremost, since you’re speaking more respectfully, I’ll say congratulations on your victory and your weight loss. But as far as giving you a title shot, I have no interest in fighting you right now, only because of the fact that you really haven’t fought anyone that I consider a top level fighter. I’m kind of sick of seeing UFC light heavyweights fight against kind of like ‘cans’ until they get a title shot. I really want to see a top contender fight a top contender and I think you need to fight someone a little bit more well-known than Patrick Cummins. Fight against Rashad [Evans], fight against somebody legit, man. Then I think it would be a little more appropriate to give you that title shot.”